Working from Home features new commissions from five artists––Miguel Fernández de Castro, Nazafarin Lotfi, Mark McKnight, Nicole Miller, and Rocki Swiderski––and two poets––Dot Devota and Raquel Gutiérrez––who are all connected to Tucson and the surrounding bi-national region. Each contributor has a unique perspective on this moment of pandemic and protest as well as on the local landscape by virtue of currently or recently living, working, or quarantining in the area. The premise of the exhibition is centered on directly supporting the creation of new objects and ideas as well as underscoring the essential work artists and poets perform, especially during moments of social and cultural crisis.

To encourage social distancing and help keep our community as safe as possible, we are using a timed ticketing system for our first weekend open to the public. Please visit within your pre-registered time frame, and plan your visit to MOCA.

If you are a Museum member and would like to come to our members preview, register here.

Reserve Your Timed-Ticket for Opening Weekend:

More about the Exhibition & Artists

For the exhibition, Miguel Fernández de Castro is creating an exact replica of a gate found between the sovereign Tohono O’odham Nation in the US and ranchland in Sonora, Mexico. The gate has been blockaded to obstruct one of the last active sites that accommodates passage for tribal citizens to sacred lands on both sides of the US/Mexico border. The replica itself will cross the border from the artist’s studio in Sonora, and will be complemented by a new video work that activates the sculpture through staged performances of the gate’s use.

Dot Devota will contribute one of her wall poems to the project, a large-scale calligraphic intervention that she will paint directly onto one of MOCA’s gallery walls. This installation, wrought in the poet’s own hand, returns her work “THE DOGWOODS” final typeset text back to its source––where it was first drawn and annotated in the middle of the night or in moments of inspiration. Devota’s wall poem recasts the wall as a space for lyric imaging, and is created in solidarity with artists and viewers who seek the dismantling of walls built for imprisonment and genocide.

A broadsheet take-away from Raquel Gutiérrez combines text and image that reflect on El Tiradito, the heavily trafficked shrine in Barrio Viejo, near the Museum. The only such Catholic shrine dedicated to a sinner in the United States, Gutiérrez meditates on this beloved and contested site through a personal and historic lens. Mimicking the offerings left at the shrine, the work is a generous offering in itself, with stacks displayed for visitors to take away with them. Inviting both intimacy and information, the piece constellates localized and often conflicting ideas of class, gentrification, devotion, myth and architecture.

A newly commissioned sculptural brass fountain will unite several two and three dimensional works by Nazafarin Lotfi. The artist’s site-reflexive installation uses formal and multisensory strategies to convey complex experiences like exile, alienation, and exclusion. Lotfi’s drawings, fountain, and figurative sculptures speak to liminal spaces, like the borderlands or diasporic experience, and register changes in light and time to tune viewers to real and imagined landscapes that define our identities and sense of belonging.

In a departure from his usual practice of meticulously rendering images in silver gelatin, Mark McKnight is producing a new set of large-scale cyanotypes. These deep blue photographs, are the direct register of bodies and objects composed to transmit symbolic, performative, and indexical information. Marked by an attention to physicality, abstraction, light, desire, and the dream space, McKnight’s practiced attention to the queer body in the landscape is carried through in these new, ephemeral pieces, which will be hung like banners, free to move and flow.

Nicole Miller, who most often directs films, is realizing a new text-based laser work for the show that uses a continuous beam of light to produce morphing phrases, inspired by poet Claudia Rankine’s writings about race, fear, and imagination. The motion, color, and form of the laser is controlled and programmed via sound waves, which produces an artificial experience of synesthesia, confusing and conflating sight and sound. Miller’s work will only be visible by looking inside of the Museum from outside of the building, creating an inaccessible, cave-like space for these private yet electric thoughts to occupy and shape-shift. This work is realized with the help of Zak Forrest, laserist.

Rocki Swiderski is making a new set of paintings for the project: three works on irregularly shaped wooden panels and a freestanding piece composed of canvas, foam insulation, and flagging tape. The painting’s surfaces signal to the menace of camouflage and patterns within noise frequencies––using bright, vibrating color as a visual strategy to blend in or to confuse. The artist also uses the structure of the paintings themselves to register as blankets, shields, or guards––at a moment when protection, whether from disease or in protest, have become essential, often improvised, and ubiquitous.

Altogether, the diverse works in the show speak to the present in profound and varied ways. While the exhibition is not explicitly thematic, there are many overlapping strategies, subjects, and ideas present in the artworks––forming an organic network of interconnection and meaning. New work produced by these notable artists, in this particular time and place, creates a rich ground for viewers to contemplate the many complex issues that mark our moment.

Working from Home is organized by MOCA Interim Director and Curator Laura Copelin with support from Wylwyn Reyes, Morah Riedl, and Wesley Creigh.

Dot Devota (b. St. Louis, Missouri) writes poems and essays about pre-sickness, sensations in the phenomenon of “falling ill,” and post-viral, chronic and mysterious illness in individual, societal, and environmental body-scapes. Her books include The Division of Labor (Rescue Press), And The Girls Worried Terribly (Noemi Press), The Eternal Wall (Book*hug), and Dept. of Posthumous Letters (Argos Books). Excerpts from her nonfiction novel, MW: A Field Guide to the Midwest, are published in PEN America, Denver Quarterly, and on the Poetry Foundation, among other places. Her recent manuscript >SHE is a work of autoimmunefiction or autoimmunetheory. Her pandemic essay “Quarantine Notebooks: A Rhetorical Analysis” was commissioned by The Coffee House Writers Project. Currently she is among 50 other “Artists-In-Presidents,” recasting the presidency with a multivocal entourage and produced in partnership with UCLA’s Center for the Art of Performance and Stanford Live Arts. Devota’s Wall Poems have exhibited at Communitie in Marfa, Texas and Berl’s in Brooklyn, New York. She has given readings in Syria, Lebanon, Japan, Taiwan, and throughout Europe and North America.

Raquel Gutierrez is an essayist, arts critic/writer, performance maker and poet. Born and raised in Los Angeles they currently live in Tucson, Arizona. Raquel is a 2017 recipient of the Creative Capital | Andy Warhol Foundation Arts Writers Grant. Raquel has performed at The Broad Museum, MOCA Los Angeles, Human Resources Los Angeles, Wildness, and Visual AIDS New York. Their poetry and essays have appeared online and in print including NPR Music, The Los Angeles Review of Books, The Georgia Review, The New Inquiry, FENCE, and Hayden’s Ferry Review. Raquel’s first book of prose, Brown Neon, will be published by Coffee House Press in the Spring of 2022.

Nazafarin Lotfi received her MFA from the School of the Art Institute of Chicago in 2011 and her BA from the University of Tehran in 2007. Combining drawing, painting, and sculpture, Lotfi creates transitory spaces to explore the temporal and spatial experience of bodies out of place. Recent solo exhibitions include: Subtle Time, University Galleries at Illinois State University, Normal, IL; Become Ocean, Soon.tw, Montreal, QC; Negative Capability, Regards, Chicago, IL, among others. In 2015–16, Lotfi was awarded an artist residency from Arts + Public Life and Center for the Study of Race, Politics & Culture at the University of Chicago. She is the recipient of Phoenix Art Museum’s Contemporary Art Grant, stArt Grant from the Arts Foundation for Tucson and Southern Arizona, and CAAP Grant from the Department of Cultural Affairs and Special Events at the city of Chicago.

Mark McKnight (b. Los Angeles, CA) is an artist whose work has been exhibited internationally. His work has been written about in The New Yorker, Aperture, Art in America, and BOMB Magazine. Recent solo exhibitions include Mark McKnight: Aperture Portfolio Prize (Aperture Foundation, New York, 2020) and in this temporarily prevailing landscape (Klaus von Nichtssagend, New York, 2020). In 2009, Mark traveled to Finland on a Fulbright Scholarship. Additional residencies include Light Work (2019) and Storm King Art Center (2017). Mark is the recipient of the 2019 Aperture Portfolio Prize, The 2020 Light Work Photo Book Award, and a 2020 Rema Hort Mann Emerging Artist Grant. His first monograph Heaven is a Prison, was published by Loose Joints in September 2020.

Nicole Miller’s video installations explore the transformative possibilities of the moving image to reconstruct interpretations of identity and culture. Her film’s subjects and their narratives often complicate notions of fact and fiction, especially in terms of African American identity. With a particular interest in the influence that music, movement, and performance play in the lives of her subjects, Miller’s work emphasizes the power of representation as a tool for reconstructing lost histories and identities. Nicole Miller lives and works in San Diego, CA where she is Assistant Professor in the Department of Visual Arts at the University of California, San Diego. Her work is included in many museum collections including the San Francisco Museum of Modern Art; Los Angeles County Museum of Art; the Hammer Museum, Los Angeles; and the Studio Museum in Harlem, among others. In 2018, Miller was the recipient of the John Simon Guggenheim Foundation Award. In 2016, she was awarded the Rome Prize and was a fellow at the American Academy in Rome for 2016-2017.

Rocki Swiderski (b. late 20th century, California) is an artist based in Tucson, Arizona. Utilizing object and image making, their work reflects on the role of sentience and modes of human protection as a means of coping and survival. At present they are interested in the weaponization of language, pattern identification, vulnerability, and what it means to daydream. Recent solo exhibitions include POM–––PALM at Williamson Knight (2018, OR), and Brushing Out the Brood Mare’s Tale at Nationale (2017, OR). Their work has been included in numerous group exhibitions nationally and internationally including most recently Fundament at darkZone (2020, NJ) and Lazy Susan with Blue Arrangements (2019, AZ). In 2015 they received their BFA from the Pacific Northwest College of Art and in 2018 they launched The American Institute of Thoughts and Feelings, an experimental project space based out of their home in Tucson.

This project is made possible with generous support from The Andy Warhol Foundation for the Visual Arts; National Endowment for the Arts; Arts Foundation for Tucson and Southern Arizona; Arizona Commission on the Arts; FONCA (Fondo Nacional para la Cultura y las Artes); MOCA Tucson’s Board of Trustees, Major Donor Circle, Ambassadors and Museum members. 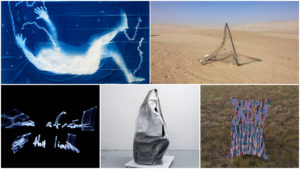