Action Painting is a newly commissioned, large-scale multimedia artwork by artist and writer Jibade-Khalil Huffman, which is installed on MOCA’s facade and includes a bold vinyl collage, multi-channel video projections and composite sound work. This commission enabled the expansion, literally and conceptually, of an image and constellation of ideas Huffman has been building over the past six months. This complex piece presents an open-ended exploration of the layers of violence, disenfranchisement and joy that mark the history of racism and resistance leading up to this time of mass protest against police violence and white supremacy culture in the United States.

This new, major work from Huffman will be visible from the street, and can be accessed by walking or driving by MOCA on McCormick Street at all hours of the day and night. The interior of the Museum remains closed, to protect our audiences and staff from the spread of COVID-19. MOCA requires visitors to wear masks and keep a safe, six-feet distance from others when viewing the artwork on-site.

Action Painting renders video footage of toppling monuments and shifting color fields over a large-scale, semi-translucent collage where abstracted images of a marching band blend with topographical lines and morphing, musical forms. The linear movements in the composition allude to discriminatory practices like redlining, segregation and voter suppression, and/or surveillance and body mapping technologies deployed by the police. These divisions both control and interrupt the composition, flowing into and through the depiction of a historically Black college or university marching band, which exemplifies collective power, excellence and resilience. An audio collage unites the visual elements of the piece and reflects on the complex familiarity of both trauma and celebration, combining and amplifying fragments of speeches, banal sounds from daily life and marching bands tuning up for a performance.

In the artist’s own words, “I’ve been thinking about abstraction and joy as a response to this moment and to the very layering of moments that led up to this. Literally layered on top of and throughout this image (of a marching band and specifically the historically Black FAMU marching band) are lines related to map making and elevation while alluding to the often brutal way this has been used to disenfranchise Black bodies. I didn’t simply want to reframe this moment or attempt to point to any sort of answers that I might presumptuously and preposterously offer as a response. As I’ve said so many times over the last few months, I don’t have the words.”

Huffman received an MFA in literary arts from Brown University, an MFA in studio art from USC, and a BFA from Bard College. Huffman is also the author of three books of poems: Sleeper Hold (Fence, 2015); James Brown Is Dead (Future Plan and Program, 2011); and 19 Names for Our Band (Fence, 2008). This fall he will present a new body of work along with a selection of recent projects at Tufts University Art Galleries, as well as a solo exhibition at Magenta Plains gallery in New York.

This project is made possible with generous support from Anat Ebgi Gallery; The Andy Warhol Foundation for the Visual Arts; National Endowment for the Arts; Arts Foundation for Tucson and Southern Arizona; Arizona Commission on the Arts; MOCA Tucson’s Board of Trustees, Major Donor Circle, Ambassadors and Museum members. 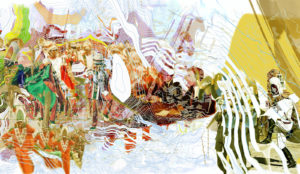