Fall and Spring Artists in Residence 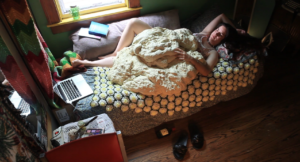 Santina Amato is a multimedia artist whose work addresses the notion of the intimate body, especially the female body. Her practice incorporates video, sculpture, installation, performance, painting, and photography and is deeply rooted in psychoanalytic thinking and feminist theory, attempting to translate the complexities of her own female sexuality, desire and erotica within the visceral relationship between the physical, the psychological, and the social of the functioning body. As a material focus, her interest in using bread dough within an interdisciplinary artistic dialogue, is its life cycle. Once activated by warm water and sugar, yeast cells split and divide in a process reminiscent of when an egg is fertilized by sperm. There is a peak moment when dough is voluptuous, full, and ripe just before it begins to ‘die’. 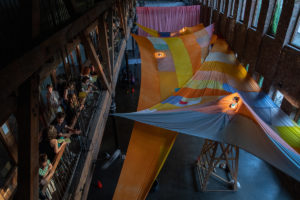 “My personal experience often serves as a catalyst for my work. I grew up in an Orthodox Jewish family in Jerusalem among strong religious and political ideologies. Leaving the orthodox world, I was drafted into mandatory service as an educator in a paratroopers’ unit in the Israeli army for two years. My resistance to the rigidity of the religious and military worlds has since found expression through an intuitive art practice which celebrates fluidity, spontaneity, collaboration and differences, all of which are ways of relinquishing control. At the same time, my religious upbringing is present in my ritualistic performances.” 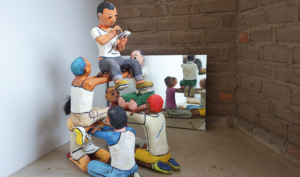 YeRin Kim-Roznowski is a Korean born interdisciplinary artist whose work has been exhibited internationally. YeRin’s work explores solitude, empathy, hierarchy, and interdependency through painting, sculpture, performance, video, and interactive installations. Deeply influenced by fields of contemporary anthropological art and social psychology, she uses various techniques and mediums to illustrate and investigate relationships between individuals, individuals and groups, and the society formed from these relationships. The artist emphasizes the contrast between the innate human experience of being bounded by our own perspective and our need for connection and interdependency on those around us. YeRin’s work depicts abstracted and simplified human relationships that beckon the viewer to recognize themselves within these grand but ubiquitous architectures of life. 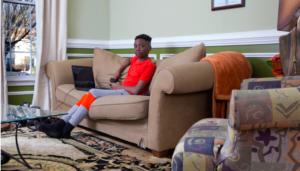 Akea Brionne is a photographer, writer, curator, and researcher whose personal work investigates the implications of historical racial and social structures in relation to the development of contemporary black life and identity within America. With a particular focus on the ways in which history influences the contemporary cultural milieu of the American black middle class, she explores current political and social themes, as they relate to historical forms of oppression, discrimination, and segregation in American history. 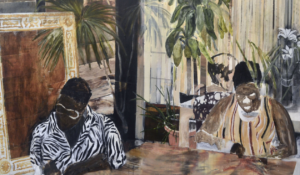 Cole is a painter who employs traditional painting and preliminary printmaking methods to interpret memories of actual and subconscious events – amalgamations of real life and fantasy, often stemming from profound personal experiences. The processes of layering and distorting are instrumental in conveying emotion in his work.The artist uses composite imagery to represent the fragmented nature of memory, narrated through personal as well as familiar references from art history.